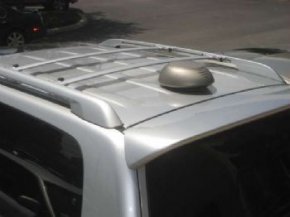 On the heels of Audiovox's announcement of an automotive version of the MediaFlo TV service for cell phones, AT&T has revealed plans for its own robust, satellite-based in-car TV service. AT&T Cruisecast, slated to launch this spring, promises 22 channels of satellite TV at launch and 20 more of satellite radio-but will cost serious money: $1299 for the system, and $28 a month for the satellite TV service (developed in conjunction with satellite industry veteran RaySat).

The system requires installation of a 3-pound, 11.3-by-10.3-by-4.3-inch antenna on the roof of your vehicle. AT&T describes this as "not particularly noticeable, " but I'd take that observation with a grain of salt: Check out the rooftop image, above.

AT&T says its technology addresses shortcomings of other in-car entertainment systems. For example, the company says, its breakthrough buffering technology keeps the show going even when you're under a tunnel or other line-of-site obstacle.