The Quantum Science Satellite will attempt an unprecedented experiment to see if the spooky property of quantum entanglement can operate at long distances by sending entangled photons from the satellite to two ground stations separated by about 1, 200 kilometers (746 miles).

Abbreviated to QSS (Quantum Science Satellite), or the better known as QUESS (Quantum Experiments at Space Scale), the satellite will also test the possibilities of communication via quantum ‘teleportation’, using an entangled pair of photons.

If the satellite can help securely transmit quantum information between ground stations, it could have huge implications for cryptography.

QUESS will be the world’s first quantum communications satellite, but other countries have plans of their own, having recognized the possibilities for encryption. 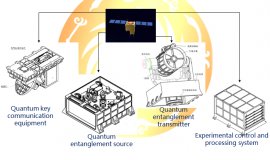 The mission is the brainchild of Pan Jianwei of the Acadey, China’s quantum space pioneer. The experiments will also involve collaboration with the Austrian Academy of Sciences in Vienna.

The day before launch, the satellite was nicknamed “Mozi” (墨子号), referring to the ancient Chinese philosopher Mozi, born around 470 BCE.

QUESS is the third of four Chinese space science satellites that will be launched within a year of each other, marking the fruition of a Chinese Academy of Sciences strategic space science program launched in 2011.

The fourth, the Hard X-ray Modulation Telescope, has recently passed factory tests and will launch late this year.

It will observe black holes, neutron stars and other phenomena based on their X-ray and gamma ray emissions over a four-year lifetime.

SMILE is one of five new space probes to study a range of Earth, solar, and deep space phenomena now in development.

“The funding means we are likely to launch 15-20 scientific satellites, if not more, by 2030, ” Director-general of the National Space Science Center Wu Ji said.