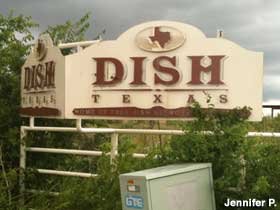 Reports and tips from RoadsideAmerica.com visitors and Roadside America mobile tipsters. Some tips may not be verified. Submit your own tip.

The DISH city sign is at the intersection of Eakins Cemetery Rd. and Highway 156.

DISH has a population of about 345. It was formerly named Clark after its founder, Landis Clark, who incorporated it in 2000 and served as its first mayor. Clark was beaten by one vote in the Spring 2005 election, and only six months later the town was officially renamed DISH in exchange for every household receiving a free DVR and free basic satellite service for ten years. At the council meeting when the measure was passed, only 12 people reportedly showed up.