Watch satellite TV without a dish

Now there's an improved Dish Hopper satellite video DVR on the market, adding attractive new features that might make it worth a second look. The big news is the Hopper's built-in Slingbox that lets you watch anything on your DVR wherever you have an Internet connection. We tested the new Dish Hopper with Sling, viewing video at home and on the go. How much of an improvement is it?

When I first fired up the Dish Hopper with Sling, I immediately noticed snappier performance when scrolling its program guide and viewing its menus. That's because Dish has upgraded the Hopper's processor to a 1.3 GHz chip. It's faster than the company's original Dish Hopper's processor, which ran at a much slower 750 MHz.

But that was just the beginning of the new coolness.

The marquee feature of this update is its built-in Slingbox. Sure, you could use an external Slingbox with the Hopper before, but now it's even easier and much more deeply integrated.

The Slingbox capability built into the Hopper lets you watch anything that DVR can output, anywhere. As long as you can log onto the Internet on a browser — or if you have an Android or iOS device with the Dish Anywhere app — you can access your Hopper, change the programs you'd like to record, rent a pay-per-view movie, watch an on-demand video or check and see if there are any recording conflicts. Here's the Dish Anywhere app's guide, on iPad and iPhone:

You can transfer video directly to an iPad for viewing at a time when you might not have an Internet connection. This works in one of two ways. When you program a show for a recording, the Hopper gives you an option to prepare the video for a mobile device. That takes care of the video transcoding on the fly. 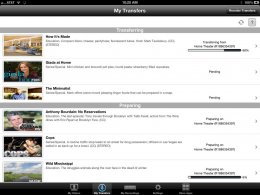 If you'd like to transfer video that you've already recorded, Hopper can let you do that too, but it takes about an hour for each hour's worth of programming to prepare the video for mobile devices. A slight downside is the amount of space these files take up, ending up being about a gigabyte per recorded hour. The transferred video looked excellent on our iPad with Retina display. This is all done with a separate app called Hopper Transfers:

Transferring video has a few caveats. Transferring only works on iPad so far, and Dish officials told me, "It will be expanded to Android devices in a future update." If you transfer a show from a premium network such as HBO, no one can view that show any more on the Hopper. And, while you can have multiple iPads paired with the Hopper, recordings can only be transferred once, according to Dish. For instance, if you've transferred Saturday Night Live to your iPad, your daughter won't be able to transfer it to hers.

The transferring feature will be handy, for example, on flights without Wi-Fi. But if you have a fast-enough Internet connection, you can also watch live TV or recordings directly from the Hopper using its new Slingbox capability. We tested it on iPads and iPhones (and it works on Android, too), both in-house via Wi-Fi and out in the field via an LTE connection. As long as the connection was fast enough, the video quality was superb.

Not only can you watch your satellite TV with mobile devices, but you can watch it from any browser, using Dish's updated website, dishanywhere.com. This means now you'll be able to watch live TV shows or any of your recordings (as well as tweak your program recordings and manage your Hopper) from any network-connected computer in your house or elsewhere:

A Slingbox user from way back, I welcomed this capability of watching live TV on a computer. With a fast Wi-Fi or LTE connection, I could control the Hopper from afar — albeit rather sluggishly — and the video looked sharp and played back smoothly. Overall, it was delightful to use. 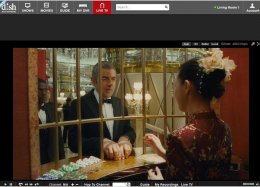 Add this integrated Slingbox capability to the Dish Hopper, and you have a winner of a DVR. It's not perfect, though. For instance, its remote control feels like an artifact from 15 years ago, with inexplicable placement of buttons:

Couldn't that big button have been Play/Pause?

There's not even backlighting on this clunky remote, which Dish should seriously consider replacing with something designed in the current century.

Even with this sprightly new processor on board, it takes a relatively long time to change from one channel to the other. Sure, the Hopper feels faster than its predecessor, popping up channel names within a second of pushing the channel-change button. However, it still takes at least three seconds for the satellite channel to be tuned in, a lag which is probably inherent in the platform. At this glacial speed, channel surfing is no fun. The pokey channel-changing performance made me (momentarily) long for the days 30 years ago when cable TV providers would give you a primitive box with physical sliders that instantly changed the channels.

The quality of Dish video is simply not that great. I noticed that more popular channels — such as the major networks, ESPN and a few others — look almost as good as the signal we get from Time Warner Cable (which itself is not as sharp nor noise-free as an over-the-air HD signal via antenna). However, other channels are obviously more compressed, resulting in cloudy-looking video that's supposed to be high definition but hardly looks it, especially on a big-screen TV.

The user interface of the Hopper leaves a lot to be desired as well. There's a steep learning curve, especially for someone who's used to a user-friendly DVR such as a TiVo. It took me the better part of a week to become fully comfortable with Dish's convoluted way of recording and viewing programs.

Those issues aside, you'd be hard-pressed to find a more powerful DVR than the Dish Hopper. Its strengths include letting you record six programs at the same time, connecting smaller units called Joeys that give you DVR capability all over the house, and its Prime Time Anytime feature. That unique capability records all three hours of prime time, seven days per week on the four major networks (ABC, NBC, CBS and FOX). This feature alone is worth the price of admission.

And then there's AutoHop, the controversial feature that lets you automatically skip commercials on those Prime Time Anytime recordings. The only catch: To watch a program with AutoHop skipping its commercials, you must wait until 1 a.m. after that show was recorded.

I also noticed that the AutoHop feature is slightly different from nine months ago. Now, you end up watching about five seconds of the first commercial and the last five seconds of the last one in a break. Before, you would only see a few frames of a commercial. Could Dish be bending to the will of those TV networks suing it for this radical new feature? AutoHop might not withstand legal challenges — but while it's here, it's a unique and useful feature, unless you're an advertiser.

The best part of this deal is this more-capable Dish Hopper with a Slingbox inside is offered at the same price as the first Hopper — the company's $10/month "DVR fee, " and $7 per month for each Joey unit you connect.

Summing up, this is a worthwhile upgrade to the Dish Hopper; if you're already a customer, I'd recommend going for the update. Its quicker response, Slingbox place-shifting and AutoHop commercial skipping sets it apart from any other DVR on the market.