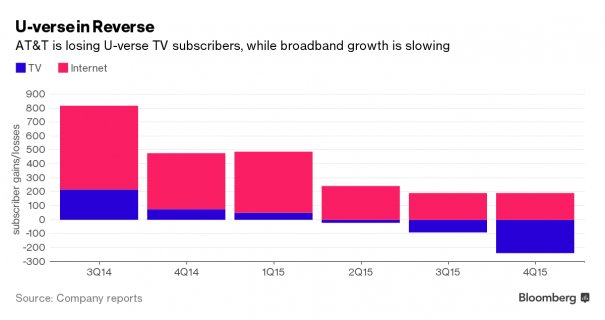 It Bought DirecTV So It Doesn't Have To

March 3, 2016 – 08:22 am
When AT&T originally announced the company wanted to spend $69 billion on a satellite TV company on the eve of the cord cutting revolution, even M&A bullish Wall Street thought AT&T was a little nuts. After all, AT&T's refusal to seriously upgrade its aging DSL networks to full fiber have left it at a serious disadvantage to faster cable broadband. Given Verizon's FiOS fiber build clocked in somewhere around $24 billion, the $69 billion AT&T spent on DirecTV could have gone a long way toward bringing those customers into the modern fiber to the home era.

But AT&T has made it abundantly clear for some time that it doesn't really care about fixed-line broadband when wireless usage caps and overage fees are much more profitable. That was reiterated this week with the news that AT&T has stopped building set tops for its IPTV over U-Verse (fiber to the node) service, and is now actively pushing those customers to satellite:

The biggest U.S. pay TV provider has stopped building U-verse set-top boxes and is nudging prospective customers toward its satellite unit, which has lower hardware and programming costs. The shift is the first stage of a plan to create a “home gateway” within three years that will consolidate all AT&T services and act as a central hub to deliver video to any device...“AT&T is going to actively get out of the U-verse business, ” said Chris Ucko, an analyst with CreditSights Inc. What's AT&T thinking? Instead of upgrading its DSL lines, the company hopes to offer customers in these un-upgraded markets a home gateway that can connect to satellite TV and AT&T wireless networks (which explains why AT&T is whining so intensely about the FCC's plan for new open set top box competition). Existing U-Verse customers will be able to connect to the devices as well, but with AT&T now pushing all new customers to DirecTV, it's not entirely clear AT&T has much of an interest in keeping these users around. But according to AT&T, this is all about meeting consumer needs: “To realize the many benefits of our DirecTV acquisition, we are leading our video marketing approach with DirecTV, ” said Brad Burns, an AT&T spokesman. “However, our first priority is to listen to our customers and meet their needs, and if we determine a customer will be better served with the U-verse product, we offer attractive and compelling options.” Here's the thing the press won't remember, and won't make a sexy-enough headline to warrant mention. To get into the U-Verse TV business a decade ago, AT&T and Verizon went state by state pushing TV franchise "reform" bills written by telco lobbyists and lawyers. AT&T effectively promised states that if they passed these bills they'd be awash in new television competition and lower prices. Of course real competition never came, prices went up anyway, and people started noticing that in many states these bills were little more than legislative wish lists that gutted any number of existing consumer protections.

So those awful laws remain intact, but the next-generation service AT&T promised was never actually delivered. Why? AT&T never wanted to spend the money necessary to really offer video over fiber, much less real next-generation broadband speeds. And while the company makes a lot of noise about its plans to deploy gigabit fiber, those announcements are largely theatrical in nature (focused largely on the occasional development community). In reality, AT&T's fixed-line broadband CAPEX continues to drop as lobbyists go state by state, gutting regulations so AT&T can hang up on unwanted DSL customers for good.