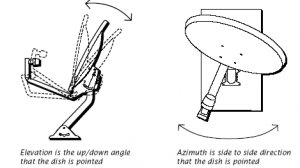 This website helpful to you?
Then make a donation via "Credit Card" for $2 or the value you want!

We are adjusting our code of applications that require the "Google Maps" for the new API version 3.0. Some features available in our applications may not work properly. Soon we will be fully adapted to the new version of the API required by "Google". Hopefully understanding of our users for the inconvenience caused.

It is the most practical and compact than competitors and you do not need a fast internet connection to use it. TrackingSat detects the city where you are and shows latitude, longitude and magnetic declination of the dish site. You can calculate at once the azimuth, azimuth magnetic, elevation and LNB skew from your city.

You can improve the accuracy of the results on your site by putting the mark on your home area. Drag and drop the marker to pinpoint the place. Zoom in for better accuracy.

Azimuth and elevation are angles used to define the apparent position of an satellite in the orbit, relative to a specific observation point. The observer is usually located on the earth's surface.

The angle of rotation (horizontal) that a ground based parabolic antenna must be rotated through to point to a specific satellite in a geosynchronous orbit. The azimuth angle for any particular satellite can be determined for any point on the surface of the earth giver the latitude and longitude of that point. It is defined with respect to due north as a matter of easy convenience. 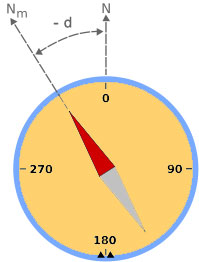 Note that you find a satellite by pre-setting the elevation accurately and then swinging the whole antenna boldly in azimuth till the signal locks up - so an approximate azimuth angle is normally sufficient.

The upward tilt to a satellite antenna measured in degrees required to aim the antenna at the communications satellite. When aimed at the horizon, the elevation angle is zero. If it were tilted to a point directly overhead, the satellite antenna would have an elevation of 90 degrees.

When your dish is pointed low down near the horizon the elevation angle is only a few degrees. At low elevation angles, below 5 deg at C band and 10 deg at Ku band, the path through the atmosphere is longer and the signals are degraded by rain attenuation and rain thermal noise. Scintillation also occurs, particularly in hot humid weather. This causes increases and decreases in the signal level every several seconds for many hours, like the twinkling of a star.

Magnetic Declination is the angle between the magnetic and geographical meridians at any place, expressed in degrees east or west to indicate the direction of magnetic north from true north.