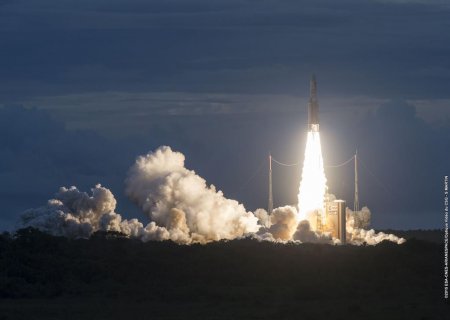 DIRECTV is expanding its satellite fleet in both the U.S. and Latin America with the historic dual launch of two new spacecraft that will significantly increase HD capacity, further secure the future of 4K Ultra HD and backup DIRECTV’s existing satellite fleet.

D-15, a more than six ton spacecraft designed and built by Airbus Defence and Space, will be the first DIRECTV satellite with the capability to operate in all five DIRECTV U.S. orbital slots and in all frequency bands (Ku, Ka and Reverse Band). This is the first all CONUS beam DIRECTV satellite to launch in 10 years, and it will expand national capacity for both HD and 4K Ultra HD channels, as well as provide critical backup for existing CONUS transponders.

Controllers made contact with both satellites confirming that all systems are functioning properly.

“We congratulate the launch team and our partners, Arianespace, Airbus Defence and Space, and Orbital ATK on a spectacular and historic launch, ” said Phil Goswitz, senior vice president, Space and Communications, DIRECTV. “D-15, the most versatile spacecraft in the fleet and the robust SKYM-1, secure DIRECTV’s ability to continue delivering the best video experience with the most advanced technology.”

SKYM-1, weighing in at more than three tons, was built by Orbital ATK on its flight-proven GEOStar-2™ platform. The new satellite will double HD capacity for SKY MEXICO and provide direct-to-home broadcast services to Mexico, Central America, Cuba and the Caribbean. SKY MEXICO is the leading company in the Mexican pay TV market.

D-15, the seventeenth satellite launched for DIRECTV and the twelfth owned and currently operated satellite in the DIRECTV fleet, will be positioned at 103 degrees West longitude and is designed to provide service for more than 15 years.