How do I Program the Remote With a DirecTV Satellite Box? 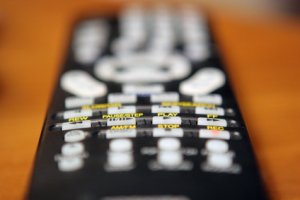 Power on your DirectTV receiver and push the "MODE" switch to DirectTV.

Push the "MUTE" and "SELECT" buttons at the same time and hold them until the green light under the DirectTV logo on the remote control flashes twice, then release both keys.

Enter the 5-digit code with the number keys on the remote. The green light under the DirectTV logo should flash twice once again if you entered the code correctly.