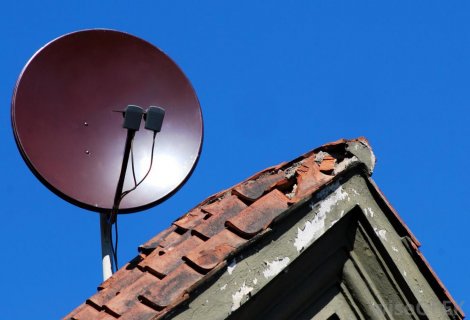 We hope that this article will be of some assistance by bringing out the most relevant differences between these two major TV entertainment services. You would still have to do some research from your end if you want to make the best choice for your needs but the issues raised in this article should help make your task easier!

Digital Cable and Digital Satellite TV are very much alike!

Digital satellite and digital cable television services are very similar in nature in that both make use of the same digital technology to deliver hundreds of channels, including a whole assortment of movie channels, pay-per-view events, and a variety of informative and entertainment content to your home.

And the advent of MPEG-4 AVC is making it possible for these TV service providers to deliver an ever increasing array of high definition programming to the home.

Yet, despite being inherently similar, these TV entertainment services are fundamentally different...

Satellite television is more universal in that it is accessible in both rural or urban areas as long as you are within the satellite footprint. This means that residences that are not in large cities or towns are capable of receiving satellite TV, thus explaining why satellite has become such an extremely popular choice.

Cable television is generally limited to towns and cities, and they typically do not offer service to rural or remote areas. Unless you are 'passed' by a cable, you will not be able to get cable TV.

Still, there is an excellent chance that you get a cable TV connection. According to the National Cable and Telecommunications Association (NCTA), it is estimated that as of September 2011, more than 129.6 million households were 'passed' by a Cable TV operator; in addition, 78.5% of these households had digital cable TV service. Furthermore, all of the top 100 cable markets in the country were 'passed' by a cable company with HDTV programming.

There is also the issue of content. We are now living in a world of digital satellite and digital cable television services, bombarded by hundreds of TV channels. In this respect, satellite TV generally delivers more content - in particular, high definition programming - than any cable TV service provider, mainly due to the bandwidth limitations associated with present cable TV infrastructures.

However, differences between the two are disappearing fast as cable companies are continually updating their network infrastructure to handle more bandwidth. It is thus no longer a straightforward issue to say that satellite can deliver more than cable. Equally important, these TV services need not be mutually exclusive, in the end, it is all a question of what are your specific TV channel requirements.

In other words, choosing satellite or cable television all boils down to selecting the TV service provider that offers you the best programming package suitable for your needs at the most competitive price.

Hence, it is important to keep an open mind when planning your requirements.

Despite the many similarities, there are a few important differences between these two TV services worth looking into.

Like its satellite television counterpart, digital cable TV requires a set-top box per TV set; this has to be HD-capable to receive high definition programming. These set-top boxes are often given to you for free but have to be returned on termination of the service contract; others rent them for modest fees, and some even offer DVRs capable of recoding HD programming.

If your HDTV has a CableCard slot, you would not need the cable TV service provider set-top-box but you will still have to rent a TV access card from the cable provider. The presence of a CableCard slot makes for quite a handy option as it reduces equipment clutter.

Apart from the set-top box, you do not need anything else. Satellite is at a disadvantage here in that you would also need to set up your satellite dish antenna; the latter requires an unobstructed view of the southern sky (if you live in the northern hemisphere) to receive satellite TV signals. Installing a satellite dish to a side wall or roof may not always be possible, depending on whether you own your house.

Cable TV has a further advantage here. Digital cable TV systems are two-way systems communicating back to back to the cable company over the same line that carries your cable television service for you. This means that unlike Satellite TV, you do not need a telephone line connection to manage your pay-per-view services, etc., over digital cable.

Usually, Satellite TV has a higher upfront cost than Cable since this has to cover the satellite dish antenna unless as a new customer, you qualify for FREE equipment and free installation offers in exchange for a one-year or more service commitment.

On the other hand, cable TV companies have to invest in massive maintenance efforts to keep up their cable networks. These additional expenses are eventually reflected in the pricing structure adopted by cable TV companies for their services.

In general satellite TV has an edge here, averaging around $80/month in service fees (excluding taxes) against the typical $100/month required for a similar TV service bundle from a cable TV operator.

This means that with satellite TV, you get more channels for your dollar than with Cable TV; the main problem with Satellite television is that you do not normally get local channel packages as instead is the case with Cable TV.

HD Programming: Edge Equal - depending on your TV viewing habits

Both cable and satellite are capable of delivering an ever increasing array of channels and both offer very similar programming packages; both are now approaching the 500 channel lineup. Yet, there are a few differences and each has an advantage over the other.

In general however, DirecTV and Dish Network offer a significantly larger selection of national HD channels than just about every cable provider. In particular, satellite TV service providers offer both east and west coast feeds and alternate sports programming for selected channels like Fox Sports, which allows the viewer the choice of either games based on regional interest or national interest. However, access to some alternative feeds may require an additional charge.

how system bet works tattoo designs how often should disinfectant solutions be changed is it road map or roadmap how many solution are there to this nonlinear system how product and engineering work together whose teaching inspired the french revolution how start up works which manager has the most ejections who's teaching whom what science is taught in 10th grade from where to start business tattoo designs when device is in vr means in hindi which solution is the most concentrated which entrepreneur and real estate promoter why teaching is important to me how much system data is normal on iphone whom synonym how development relates to how you learn how development happens roadmap how to create where to find device id what solution is used for covid test how development affects environment whose teaching is in support of education for all how technology affects our lives where to find system 32 when starting up a business where problem solution when entrepreneurship started how start up a conversation where was a teacher filmed 2020 garnier products entrepreneur who are successful which entrepreneur is not intended in innovative how solution is mixture where the london is located why solutions are important how business days in a year which solutions does iqbusiness offer how long teaching certificate where to find system configuration where to solve math equations where to watch project x how to do roadmap where teachers work what's start up
Source: www.practical-home-theater-guide.com

@Heather_cdm I think everyone is watching big brother after dark on Pop TV if you have that channel on cable or satellite
Wed, 14 September 2016 04:06 AM