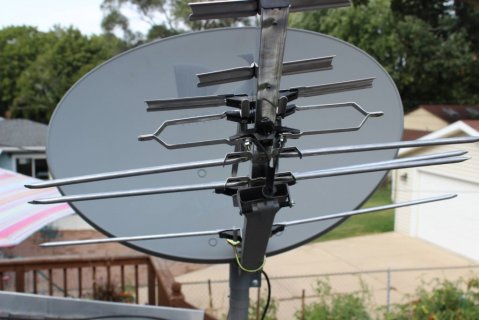 When I moved from San Antonio back to rural North Carolina, I found myself completely unable to get a wi-fi or cell phone signal where I lived. The only way for me to get a cell signal at all was to drive over a mile in either direction from where I liveed. I first thought my problem was my cell carrier. I decided to change carriers so I had several friends check out their signal strength while they were visiting me so I could better decide which carrier to go with. Of the three other major carriers we checked, not one could get a signal at my house. It was apparent that my problem was my location. I was at the bottom of a shallow valley. It was uphill in nearly any direction from there.

I had to find a solution. I checked into an external antenna for my cell phone but found they cost nearly $50.00 and there was some question about whether they actually work. I knew there had to be a better way. While working in my yard one afternoon I noticed an old satellite TV dish on top of a pole in my backyard. It had been left there by the previous residents. Suddenly a light bulb came on. I grabbed some wrenches, took down the dish and held my cell phone next to the antenna's horn and pointed the dish in various directions. I was amazed to find that I got full signal in one direction. I could not believe my eyes. I went from no signal to full signal and had not spent a dime or changed anything on my cell phone. Just to make sure I made a call using speaker phone and found that this thing truly did work.

The next test came when I took the assembly inside the house to try it. With aluminum siding on the house I have problems even getting a television signal using a rabbit ear antenna. To my surprise, I got two to three bars inside so long as I pointed the dish at a double window in my living room. I no longer missed calls and I didn't have to leave home to talk on my cell phone. Using a blue tooth headset really worked well. It isn't an ideal setup but it worked and it didn't cost me anything. It was also a great way to recycle that old satellite antenna that would have ended up in the trash otherwise.

I had a friend give me another old dish that I used for wi-fi. I mounted it on the pole the other dish came off of. After some tweaking I found several really strong wi-fi signals that I could not get without the dish thanks to some really great neighbors with unsecured networks. ; )